The Making of the Boxed Set

The main collaborator that Ram Dass had on the FBTO Box Set was the visionary artist Steve Durkee. Today he is known as Sh. Nooruddeen. Steve and Barbara Durkee founded the Lama Foundation. Barbara was one of the four artists to work on the Core Book and had introduced Steve to Richard Alpert in Millbrook, NY (she had known Alpert in college and helped him grade papers). This introduction began a close working relationship and important collaboration. Nooruddeen, in an email and interview shared, “I am the person who conceived the idea and form of the box, coordinated and contributed to the art work, and oversaw all the printing and production.”

Richard Alpert went to India with Steve and Barbara’s friend, David Padler. Steve and Barbara founded the Lama Foundation in 1968. Barbara, who is now known as Asha Greer told me in a 2011 interview: “Our idea was that he would go there to get enlightened and we would start a place where people in this county could come, do retreats, and study great spiritual teachings.”   The Lama Foundation was founded as a place where people could spend a couple weeks in retreat with gifted spiritual teachers to take in deeper the essence of the teachings. Their original vision was very eclectic and inclusive: Hindu, Buddhist, Zen, Sufi, Christian, and Native American. Recordings were made of these programs. During the winter months, the people remaining at Lama, made transcriptions of those recordings. To help share the teachings, they created The Bountiful Lord’s Delivery Service to deliver the recordings and transcriptions. People would subscribe, and Lama would mail them out.   From Bindu to Ojas became one of the first issues from Lama. In this day and age, it’s hard to imagine but there was no charge for the FBTO box. People were able to order and make a donation to cover the cost if they could. Ram Dass had done a series of talks in California and the West Coast to help with the expenses in making the box. At one point near the end of the box distributions, fifty cents to help with postage was requested from people who had ordered a box set.

There were two separate printings of the box set, but there are no differentiations between those two printings. Nooruddeen is not sure what the total number of box sets were, but he is confident that there were at least 1000 copies total; wouldn’t possibly be the 300 frequently quoted on Ebay sales and internet. Newspaper Publishing Corporation of Albuquerque, NM produced most of the contents of the box. Their records were long gone. Finding the exact number of copies has been a real mystery, with different numbers quoted as estimates. However near the beginning of an interview with Ram Dass in 1973, posted here on FBTO home, he clearly states without hesitation 10,000 copies of the FBTO Box Sets were made.

The record came from Elektra Records. Mr. Lewis, who headed the work at Newspaper Publishing was very open hearted, took a great deal of care in the production and was unsung hero of the book. He was flexible and wanted everyone to be satisfied.

Asha: “Ram Dass came back from India and we did a several day seminar with some of his students and fellow spiritual travelers, some which had been in India with him. Afterwards we were all in our house talking, and Ram Dass said, “Do you want to do a book together?” My husband said yes, and so an arrangement was made to come to Lama the following summer and we would write the book. He came to New Mexico desert the next summer.

At that time I had gone into a 10 day retreat, and all I knew….they had done some planning before, but not a terrific amount of it…and so all of these things were kind of put together by Steve and Ram Dass, not really put together, but planned out. The different parts of the box set. The Cookbook for a Sacred Life…all these things. I had the feeling of how fun putting this book together was going to be because Joe Bonner was in the group when I came down from my retreat and in front of the dome, which is also where the library was, there was a little sign that said: No Fishing. I realized that a little pool of water had collected from rain, and it was always dry there before. The “no fishing” sign was hilarious.  No fishing at Lama in that desert!

So I walked into the library, that’s where we did it all. What was happening was that Ram Dass was up writing this book, Steve was taking the pages from him, and we had very large pieces of paper that still exist (and we’re not sure what we’re going to do with them – we’ve made silk screens with some of them and half-tones also…but they were rolled up for 30 years in the library, stuck in the corner and now it’s hard to find a place to store them!). Anyway, I walked in and there were the other artists. The decision had been made to hand stamp all these pages and, you know those children’s rubber stamps that you get?  We had these stamps, and it was all done with one set of those rubber stamps, but maybe we all had sets.

Anyway, Steve would do the layout and come down with the pages that we were to do, and the four would read the pages and divide them up: One would say , I’ll do this  and I’ll do that………and we would stamp them……anyway we divided the pages up to illustrate and then we’d meet the next day….or a couple of days later if there was a lot of work to do at Lama. But mostly that’s all we did, we made FBTO. I have no idea how long it took us. I don’t remember if we took days off. I just remember that during that time, that’s what the four of us were doing, and it was really fun.

And then the decision was made to print it on brown craft paper. The paper was not only a question of aesthetic, but it didn’t cost as much money, and it’s beautiful. And then everything would fit in the box, like a pizza box. I don’t think we were thinking pizza box, because pizza wasn’t popular then to the extent that it is now. The idea had much more to do with the shape of the book and making it square and putting the stupa on it. Steve was really into stupas, very much so…and this was all very much Steve’s aesthetic.

One of the artists was Frances, who is now called Noura. Sarada was another artist, who was also a musician. She took charge of the chanting that became the FBTO record album. Joe Bonner, also known as Dwarka was also with us.   As artists, with Steve, we divided up the work so that each of us was responsible for a group of individual pages. We’d sit with the pages, and we’d have four pages, or maybe we’d have five or six pages and we’d look at them, and then see who was going to illustrate this, or who would be most appropriate with this. So the artists took the text and basically divided it up and…nobody worked together on any page, but we would sit together and shoot the breeze, and share ideas we were very open to each other’s ideas.”

Asha: “A last story…When we made the box set, we advertised it to the Lama mailing list, and other mailing lists. There were a large number of people who ordered it. We got all the orders, and I was the secretary and everything was done by hand…but we had forgotten to get enough money for postage.

So all the money we could gather together went into publishing, and after it was being published, we thought, ‘Oh my God, where are we going to get the money to send this out?!’ So we sent out again to everybody that had ordered it, we sent to ask them for fifty cents to cover the postage. That’s what the postage was at that time. Well the money came in quarters, people sent quarters. So there was these two big bowls of quarters in the library.

And we had all these kids at Lama. I was the principal of the school and one the teachers came and said they were really concerned because my son, Dakota, was buying ice cream every afternoon for all the kids in his class and many of the other kids in the school, and I guess my daughter was doing the same thing. It turns out that before they’d get in the car, they’d put their hands into these piles of quarters. He’s still the same way, he still buys ice cream for everyone.”

A special thank you for the generous, insightful interviews I had with Nooruddeen and Asha! Also thanks to Ahad Cobb for the gracious permission to use the pictures here from his book: Early Lama Foundation. 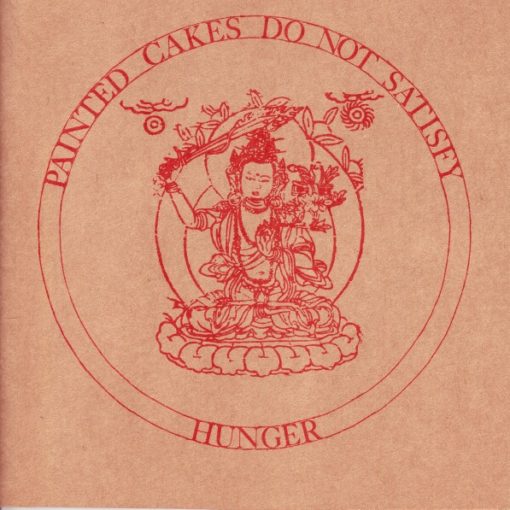 Part four of Be Here Now, the bibliography, was originally a small brown pamphlet with red print. 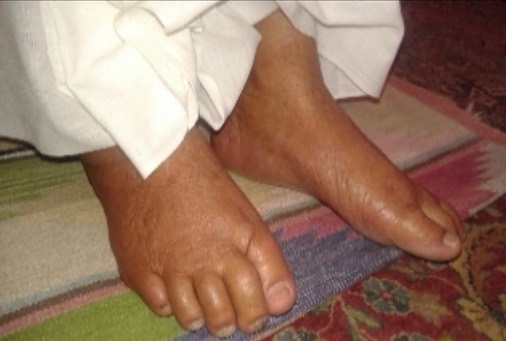 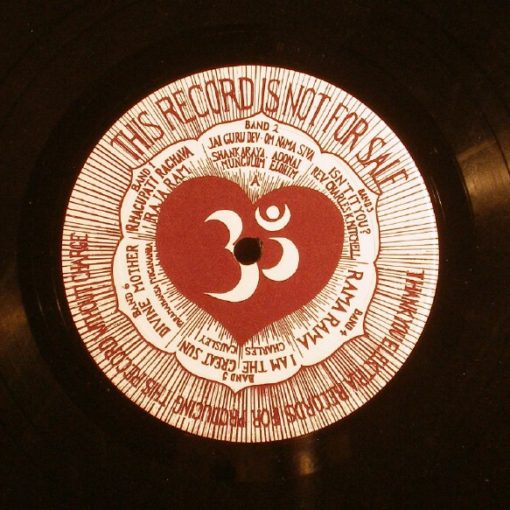 A long playing record of chants and readings was included in the FBTO box. Ram Dass, and Lama Foundation music, chanting and teaching. 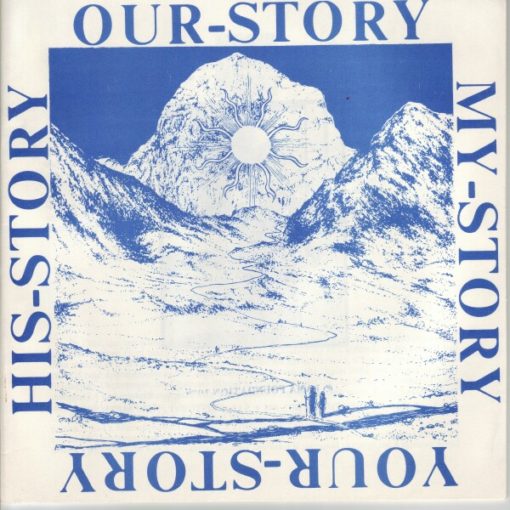 This cover is unique to FBTO. In Be Here Now this is the first section with Ram Dass telling his story, which is our story.